interface is the artificial differentiation between two media (A.R. Galloway)
yellow from google books font from my typewriter flux from my thoughts 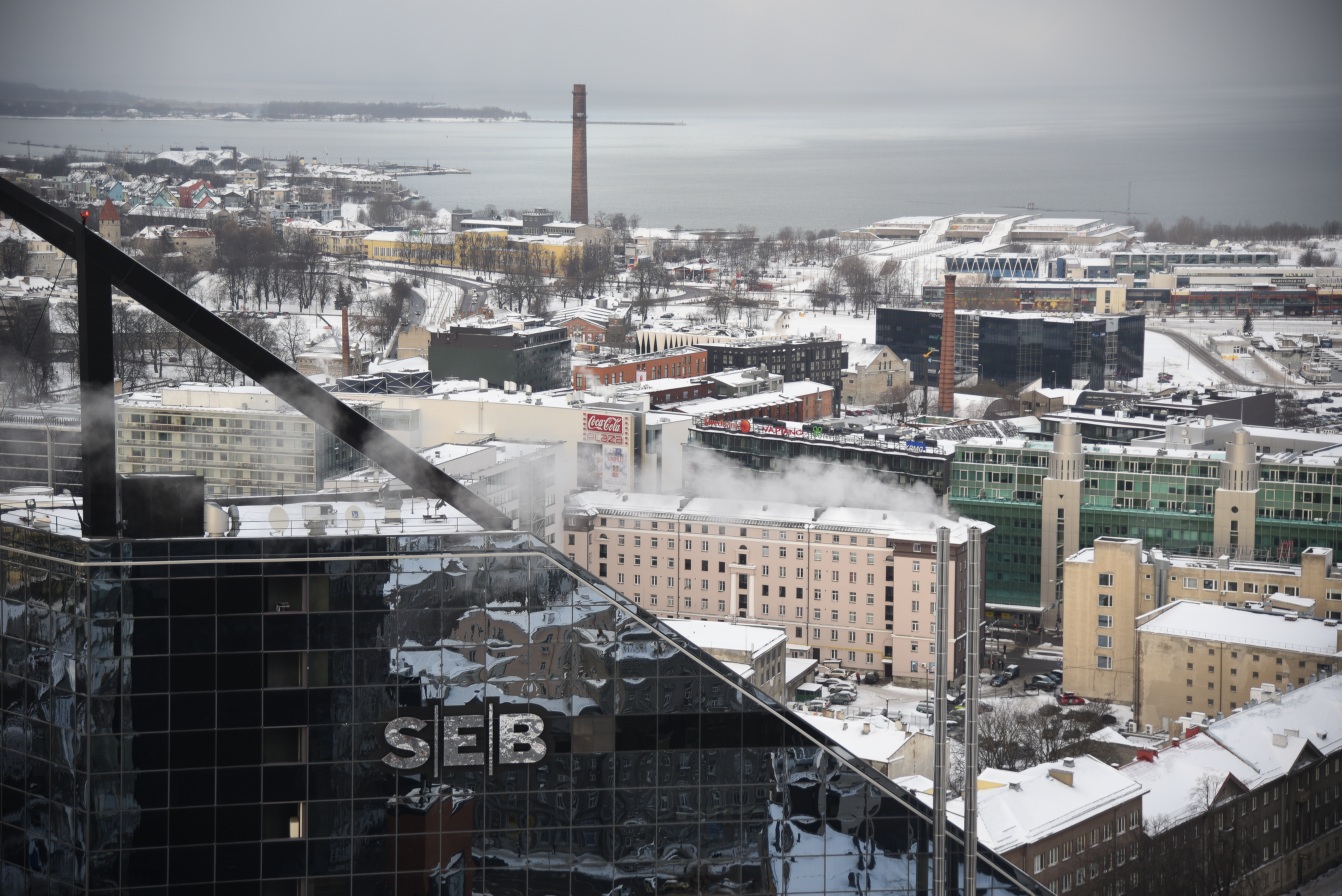 On a very windy midnight of December the 20th a white wooden door (№1) was put by the artist anonymously on the rooftop of Tallinn town hall by the sea. Door was installed in a narrow white wooden frame where it could pivot in both direction — seawards as well as townwards. Frame was tied to metal drain flanges in four corners of the roof, installation adventure reminded putting up the sails in storm: "rigging" included four long steel cables with tensioners, thick elastic to limit the door travel, frame with two offset pivots, door and a small wooden plinth to protect the roof beneath the door frame. Linnahall is one of the very few places in the central Tallinn wherethrough town can talk to the sea and backwards. On one hand it is a highly fragmented speech torn into myriads of private encounters, on the other — a super-computer synthesized weather forecast. The utmost in analogue and in digital. With its corcert hall, iceskating and other internals disused and locked since the fall of USSR, Linnahall now exists in a semi-ruined state (warmed in winter just enough so as not to collapse) as a crawling giant's back whose stair-vertebras carry people in their beautifull and useless journeys back and forth to see the sea.
The door stood there for approximately two months seeing storms, snowfalls, human attention, human aggression, selie's backs, dusks, dawns etc. Artist-code search script has aggregated more than thirty images of Linnahall with the door made during those two months and published in various social networks. Some images can be seen here including the background (taken from Flickr) and in the scroll-box.

On the roof of #Linnahall #linnahalla🌸 #graffiti and a #random #door - #art?✌️ #tallinn #estonia

2.5 hours, 27.02.2015
...finally came Leo, who — apart from a brief period between '66 and '68 — fills the logo since 1957 until the present day (during the two intermittent years MGM used a stylized logo, similarly to the one that can be seen in 2001: Space Odyssey). In cases different roars were played simultaneously, moreover, each lion had a longer and a shorter performance (three‐ or two‐roar versions)...
...after Thalberg's death, Mayer assumed total control of all MGM productions {...} "MGM functioned like General Motors", recalled Ricardo Montalban, "It was run with such efficiency that is was a marvel ... it was amazing." For a while this formula assembly line worked, particularly since what became known as 'the MGM style' remained a slow, though ever‐evolving constant on the screen, overseen behind the camera by Production Designer Cedric Gibbons. Henceforth, MGM's movies were an architectural treat for the eye as much as they were emotionally satisfying for the heart and soul. Mayer's zeal for 'family' films bode well with war time audiences who sought escapism over reality...

collage by the artist from one, two, three

attention 1 -1 2 3 4
further: the cinematic mode of production by Jonathan Beller Is a Museum a Factory? by Hito Steyerl → Eliminating Labour by Benedict Seymour

©©
collage by the artist from Charlie Chaplin's "Modern Times"production must not be interrupted by consumption?

asymmetric conductance e-component
An anual festival of american cinema Freedom Fries took place in Tallinn from 27th of February till 5th of March showing seven films from seventies, eighties and nineties as well as "central" film of the festival — 2001: A SPACE ODYSSEY by Stanley Kubrick from 1968. The festival had a preface show in white‐cube as well as postcriptum in black‐box — PREffff and POSTffff. A work titled "assembly line" was installed in 2.5h long PREffff group exhibition on 27.02 in a grey‐floored white cube located in a sewing factory most of which has become a communal space for artists' studios. This film‐long exhibition featuring four contemporary estonian artists: Ats Parve, Kirill Tulin, Eilve Manglus and Sven Parker was curated by Mihkel Ilus
assembly line:in a gallery wall7 narrow vertical slit6 is cut and a little room (equilateral triangle in plan4=3) built behind. Its two measures are taken from those of a white wooden door3 (№2) that constitutes one of its walls opposite to the slit. A typical entrance door spy-glass2 is put in this door, but the opportunity to look from the (bathed in warm light5) interior of the room through the peeping hole onto the outside world is hindered by too narrow a slit making room itself inaccessible.
Behind the door, in the outside a high‐brightness projector1 and a pair of loudspeakers are placed. Projector's wide‐angle lense is faced by peeping hole's one — eye contact is established. No mediating screen in‐between, but a direct clash of two opposite operations: one of projector's attempt to widen‐out and the other of spy‐glass — to narrow‐in. As a result a narrow focused light‐beam is cast accross the gallery space onto the opposite wall connecting the two outsides of the triangular room.
MGM's roaring lion intro becomes an almost abstract puddle of light8 barely visible on a brightly‐lit gallery wall. But Leo's presence is audible as a repetition of a repetitive roar inundating the white‐cube. Visitors nervously look around for a "pet" that makes chitchat and wine drinking somewhat uneasy at this opening. From time to time artist (Kirill Tulin) turns off gallery light and the spot on the wall becomes instantly visible, sound connects with the image and one easily persuades himself that he sees a lion's head in the pattern of golden light.
Meanwhile in the lion‐lit darkness another artist — Sven Parker — moves his slowly undraping work to a new place, then light turn back on into a slightly altered situation.

gallery light: OFF / ON

gallery light: OFF / ON

emulation as a
preservation
strategy →

“…and suddenly we are afraid to change anything…”